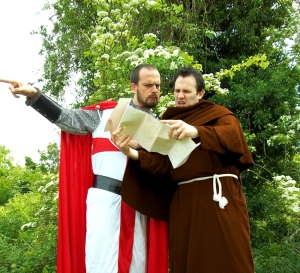 The show is an afternoon matinee performance giving families a chance to go to firework displays later in the evening, without missing out on this very special opportunity.

In what may be a theatrical first, The Pantaloons are performing every single one of the 23 completed Canterbury Tales; no mean feat considering the play features a cast of just six actors playing over 70 characters. The Pantaloons are not making it easy for themselves as every story will be performed in a different theatrical style. Audiences can expect pantomime, puppetry, masks, musicals, mime, farce, reality television, horror, opera – even Shakespeare gets a look-in!

Complete with a medieval market beforehand, when the audience can interact with the characters, buy their wares and even have a kiss with the Wife of Bath, this is more of a total theatre experience than ever before. 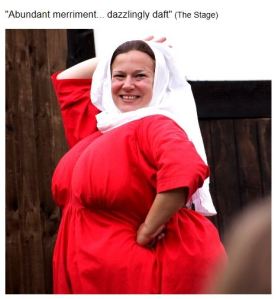 The Pantaloons, who have received international acclaim for their annual ‘Shakespeare-with-a-twist’ productions, are taking a break from the Bard in 2011/12 to breathe new life into this classic catalogue of medieval misadventures.

The play follows a group of pilgrims who decide to hold a story-telling contest on the road from Southwark to the shrine of St Thomas Beckett in Canterbury. The pilgrims are from all walks of medieval life and include a Knight, a Miller, a Monk, a Prioress, a Shipman and a rather insatiable Wife of Bath. Their stories are just as diverse, including old favourites such as ‘boy meets girl’, ‘talking chicken meets fox’ and ‘red-hot poker meets naked bottom’…

Anyone unfamiliar with middle English has no need to panic as the show has been newly translated into vibrant modern language. 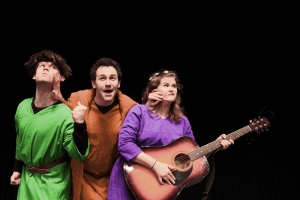 Mark Hayward, co-producer and co-author, explains the translating process. “It’s all about being faithful to the original text whilst making it relevant to a modern audience. It’s a tricky line to walk but as we were translating we realised that the key things were to keep it accessible and keep it funny.”

“There are several tales that are like mini-plays in themselves,” says Hayward. “Famous ones like The Miller’s Tale and The Wife of Bath’s Tale deserve a proper showing. Other stories have been condensed into sketches, songs or even limericks. Many of the lesser-known tales would be rather unpalatable to a modern audience without a good pinch of irony!”

Like Chaucer’s rude original, the show promises plenty of bawdy fun but, with something for everyone, this family-friendly adaptation is suitable for all ages.

Find out more about the Pantaloons here

Tickets are available online here and reservations can be made by contacting Becky on willsbecky@googlemail.com They will also be available from Waterstones, Kettering and Tourist Information, Kettering.