A new venture celebrating Kettering and its people takes place over the weekend of June 5 – 7, 2015.

Called KETTFEST this is a showcase for the town which has been organised by the people of the town whose aim is to give those living outside of its boundaries an insight in all that Kettering has to offer.

Over the course of the three days visitors will be able to experience a multitude of different events being held at various venues across the town. Whether it is culture or countryside, ale (real) or food or whether your interests encompass history or modern art, music or magic these and many more will all be there to explore.

Businesses, churches, schools and organisations are all getting involved in this project to create a spectacular weekend of all things Kettering.

To keep up to date with the latest news click here to read more on the KETTFEST Facebook page. If you’d like to access the KETTFEST forum page click here, in this forum you can find out how to take part, what will be going on or just peruse interesting facts about Kettering.

The sleight of hand and quick wit of Otiz Canneloni combine to create a remarkable and compelling act for all ages to enjoy.

As part of the KETTFEST celebrations, Kettering Arts Centre, is pleased to announce that on the afternoon of Saturday, 6th June it be presenting a unique show: History of Magic – Abridged.

Curiosity, disbelief and dare we say, scepticism, have drawn people to the world of magic for centuries. However, no one, until now, has quite mastered the techniques that Otiz brings to the stage at all of his performances. Only he can condense the history of this ancient craft into a side-splitting hilarious show that has to be seen to be believed – he really does have the magic touch.

With many a trick up his sleeve, (where else), this abridged history begins with the first magic illusion then takes you on an informative journey on the development of this art, but this is no ordinary history lesson. Delivered the flair, panache and quick-fire wit of the stand-up comedian Otiz recounts the chequered history of magic with dexterity and plenty of audience participation – hands-on opportunities play an important part in this show.

Informative it is but with a mind more suited to testing crash helmets, his performance fluctuates between sheer genius and downright stupidity making for one truly family oriented show. He once said that it has taken years of practice to make something so simple look so difficult.

This is family entertainment at its best and whether you are five or 105 your attention will be firmly fixed on the stage from start to finish.

The show starts at 2pm and tickets, cost £10 (Concessions £8) or £30 for a family of four (or more), are available from Waterstones, Kettering and online. Early booking is advised to avoid disappointment.

A night of hilarity is being presented at Kettering Arts Centre as part of the KETTFEST celebrations.

Renowned for his unquenchable thirst to break boundaries Phil is an exciting performer who keeps his audience on the edge of their seats – never knowing in which direction his mischievous rants will lead. A keen sense of fun and an eye for the shocking and absurd no subject is off limits to this enigmatic performer who breaks boundaries just because they are there to be broken. What is does mean is that there will always be something new in each show making them truly one-off experiences.

Click “HERE” to read our exclusive interview by Pete Austin

Since 1999 Phil has appeared regularly on television including a guest spot on BBC’s Never Mind the Buzzcocks and The Alternative Comedy Experience Comedy on Central TV. He also portrayed Terry Gilliam in the 2013 film Holy Flying Circus which won the best original programme at the Broadcast Awards.

Support acts for this special event are the Scottish comedian Stephen Carlin, writer of the recent BBC radio series Gus Murdoch’s Sacred Cows, and London based Mark Restuccia who has performed at well-known UK clubs including Jongleurs and The Comedy Store. Holding the reigns for this event will be the Rolling in the Aisles regular host, Nick Wills.

Suitable for ages 14+ the show starts at 8pm and tickets, cost £9 (Concessions £7), are available from Waterstones, Kettering and online. 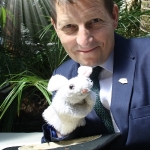