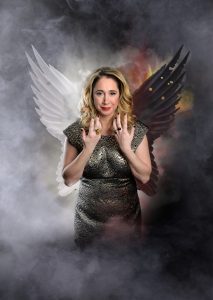 Seven’ is hung around a gig Tiff did in David Lynch’s nightclub in Paris last year. An evening where she ended up hanging out with Josh Homme and Brody Dalle one month before the Battaclan attacks. In ‘Seven’ she explores the need to make huge worldwide impactful events about us. The show delves into morality, sin, virtue, machines, humanity, ethical top trumping, terror attacks & activism, charity, film reboots & clouds.  She also visits the concept of shame, fame, vanity, social media comparison and mental health.

Quickly becoming a well-known face on television screens, 2015 saw TIFF play series regular Tanya in BBC3’s hit mockumentary People Just Do Nothing, which will be returning in 2016 for two more series, join the panel twice on Mock The Week (BBC Two), perform on Comedy Central’s Russell Howard’s Stand Up Central, be a guest on Dave’s Alan Davies: As Yet Untitled, recount a story on Comedy History’s Drunk History and become the UK correspondent on for the new Australian satirical programme The Weekly With Charlie Pickering. Other credits include The Office (BBC Two), The Apprentice: You’re Fired (BBC Two), Only Joking (Sky), Russell Howard’s Good News (BBC Two), Never Mind the Buzzcocks (BBC Two), Celebrity Deal or No Deal (Channel 4) and Safeword (ITV2).

“This is a heartfelt, hilarious, provocative, important hour of stand-up from one of the best in the business.”

“It’s punchy and political but in the best, most human sort of way. It’s charming but hard-hitting and it’s radical, but not self-consciously so.”

“Whatever it is, Mad Man has a heart-warming quality, even while it is knifing you in the throat” 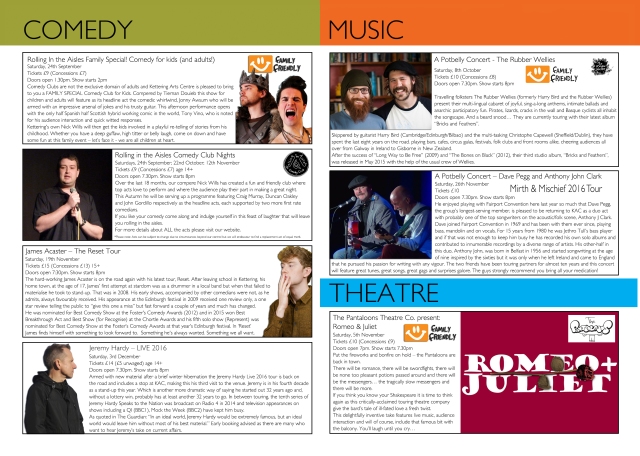 Tickets for these events are available from Waterstones, High Street, Kettering, by post from Becky at St Andrew’s Church (cheques made payable to “PCC of St Andrew’s Kettering”) to St Andrews Vicarage, Lindsay Street, Kettering NN16 8RG You may also buy or reserve tickets from Jaime Ferreira by email at office@ketteringartscentre.com or online at We Got Tickets (subject to a booking fee).