Tanyalee Davis is standup comedian who inspires, enlightens and entertainsher audiences while headlining at comedy clubs, colleges, and comedy festivals throughout North America, the UK, and other parts of the world with her own unique perspective and somewhat racy brand of comedy.

Standing at 3′ 6″ tall, Tanyalee is the Ferrari of comedy – low to the ground and kind of racy. 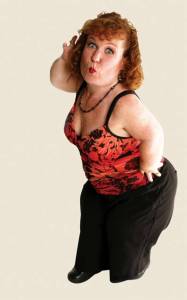 Canadian born, Tanyalee currently makes the stage her home while touring all over the world bringing the funny!

In 2007 Tanyalee premiered her first one-woman show called “Little Do They Know” at the Edinburgh Fringe Festival where she received 4 star reviews.

In July 2011, the pilot episode of “Adam Hills: Comically Challenged” aired on BBC Northern Ireland where Tanyalee was featured. This show is currently being targeted at the US market.

Tanyalee starred in the premiere episode of “Last Comic Standing 2”, “Little People, Big World” as well as featuring on “World’s Smallest People” on ITV (UK) and TLC -The Learning Channel.

Working on “Austin Powers 3: Goldmember” movie teaser was a highlight of Tanyalee’s career, along with featuring in a movie called, “For the Love of Money”. Tanyalee has also appeared on MTV’s BASH and Dave Attel’s Insomniac show: Live at the House of Blues.

In 2012, Tanyalee supported the amazing Frankie Boyle on his national UK tour. 2012 also saw her star in Season 1 of CH4’s hit TV show “Im Spazticus”. The show was so successful that she was subsequently invited back to star in a bigger role in Season 2, which aired in late 2013.

Tanyalee is also part of Abnormally Funny People, an ensemble show, performing throughout the United Kingdom.

Tanyalee’s perception of people, and how they perceive her, exaggerates the humour of life’s “little” tasks and routines. One theme in Tanyalee’s act is about being “sexy”. The “sexy comes from within”, which means everyone can be sexy and Tanyalee proves it.

2015 saw her UK Television prime-time debut when she appeared on BBC1’s The John Bishop Show, quickly followed by her amazing debut on BBC2’s Live At The Apollo 2015 Christmas Special. Both of these dazzling performances saw her stock as a headline comic rise to even greater heights!

Tanyalee continues to make a significant dent in the worldwide comedy circuit, headlining throughout the US, Canada and the UK. What she lacks in height she makes up in tenacity. She is often referred to as “The Little Lady With A Lot Of BIG Laughs.”

“Tanyalee Davis is simply one of the funniest people I know. She has a unique view of the world and if you haven’t seen her I urge to go, sit back, relax and laugh. ”
JOHN BISHOP

“A master of physical punctuation”
THE LAS VEGAS SUN

“touch you, amaze you, entertain you hugely”, “cleverly crafted”
THE SCOTSMAN

At the age of 15, Christian Reilly joined a band to get laid. The Salvation Army had different ideas…

As former integral part of the Perrier award-winning show Otis Lee Crenshaw and the Black Liars, with comic/songster Rich Hall, Christian’s career has taken him around the world three times. On his way, he received accolades at international festivals and numerous network TV credits in the USA, Australia, New Zealand and Britain.

Now a solo stand-up performer and playing all the major comedy venues in his own right, Christian uses his dynamic guitar and vocal skills to target histrionic rock bands, musical theatre and morose indie musicians. He recently wrote and performed for ‘That Was Then This Is Now’ (BBC Radio 2) as musical counterpart to Richard Herring and Emma Kennedy, as well as giving his improvisation skills an outing on Radio 2’s ‘Jammin’.

Christian’s comic songs, improvisations, sharp wit and youthful energy have delighted audiences wherever he performs. He was recently interviewed for the British Comedy Awards Magazine, and will be appearing in Edinburgh in 2006, performing in the ever-popular ‘AAA’ at the Pleasance Courtyard.

“The word ‘charisma’ is bandied around too often, but Christian does have it in spades” CHORTLE.CO.UK <http://CHORTLE.CO.UK&gt;

“If you’re a fan of Bill Bailey or Rich Hall, you’re probably a Christian Reilly fan already” THE GUARDIAN

“Bill Bailey watch out, there’s a new kid on the block!” ONE4REVIEW.COM

Rod Shepherd, Croydon’s second best conspiracy theorist and ex-cult leader is here to talk to you about the murky world of ‘conspiracies theories’ and to feed you the truth!

Are you being brainwashed by your government? Of course you are, wake up, you’re all slaves, being slowly starved by the system.

He’s described as David Icke with a splash of Koresh, that’s not an aftershave, that was a mass murderer from Waco, so the FBI said!

“Not to be taken seriously” Sutton and Carshalton Times

Jeff Downs is a writer and comedian. He has created several comedy characters such as self-help life-coach Larry Black and appeared in the long running Edinburgh Festival hit sketch show ‘The Bootleg, Bootlegs’. Jeff was a regular contributor as writer and performer to Bob Sinfield’s Laughter Zone on ‘One Word Radio’. Currently he is collaborating with Alfie Joey on a number of projects which include Spinners, a sketch show for Channel 4 Radio.

“…had some truly great observations, a very likeable character that makes it easy for an audience to follow him on his ever more bizzare course…” CHORTLE.CO.UK

“Seen him twice … and he’s ripped the roof off the building both times.” CHORTLE.CO.UK