Rolling in the Aisles Comedy Club Night With Dominic Holland

For our exclusive interview with Dominic Holland  By Pete Austin click here.

Topping the bill we have none other than Dominic Holland, the man described by The Daily Telegraph as ‘One of television’s quickest wits’. Since 1993, the year he won the Perrier Best Newcomer Award, Dominic has continued to be in regular demand and has been a familiar face on the comedy circuit, (he has performed five critically-acclaimed sell out one-man shows at the Edinburgh Festival), and for his appearances ‘on the box’. Many will have seen him in the Channel 5 panel show ‘The Wright Stuff’ where, alongside Lee Hurst and Marcus Brigstocke he has been a team captain, having appeared in 143 episodes since 2004 – the last being the 2015 Easter Special.  He has also has been the guest on HIGNFY and They Think It’s All Over.

Tonight he will be bringing his stage act to Kettering Arts Centre and you will be in for a treat.  Every performance is different as his acute eye for people’s idiosyncrasies is the springboard from which he is able to weave minute details and observations in his material.

This show will allow you the chance to see for yourself why Dominic has been hailed as one of the country’s most respected, and if that was not enough…

Support acts on the night are London-based Philip Simon who has been entertaining audiences on stage and TV since starting out on the comedy circuit in 2011. He starred as Daddy Pig and Danny Dog in Peppa Pig’s Party which had a five-week West End run and toured the UK for more than a year. Philip is gaining a glowing collection of reviews, The Stage saying: ‘Philip is never less than hilarious’. 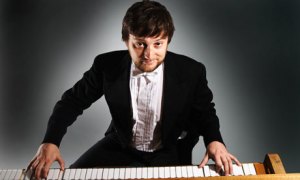 Stepping up to the mike to open the show is James Sherwood, a comedian, fluent in topical comedy and a master of the one-liner and who, no doubt, will be including reflections from his 2015 election night Internet broadcast.

James is also a talented musician. Primarily he is a classical singer and on most Sundays takes his place as a chorister at a church somewhere in London but he is also a pianist, composer and arranger. Accompanying himself on his long-suffering keyboard your entertainment will be further enhanced by the introduction of some of his self-penned comic songs into his act.

As usual, our compere for the night is our own Nick Wills.

Tickets for this show are available from Waterstones, High Street, Kettering, by post from Becky at St Andrew’s Church (cheques made payable to “PCC of St Andrew’s Kettering”) to St Andrew’s Vicarage, Lindsay Street, Kettering NN16 8RG. By email contact Jaime at office@ketteringartscentre.com and also On-line at We Got Tickets (subject to a booking fee).