Dave Keech’s Close to the Bone 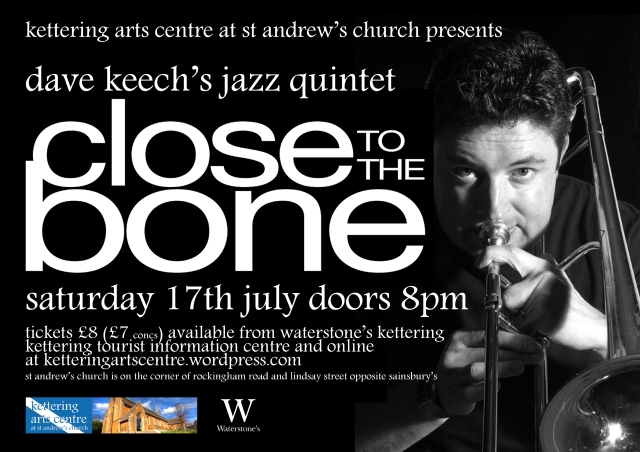 We had a fantastic summer evening concert on Saturday 17th July 2010, as Kettering’s own Dave Keech returned for a triumphant homecoming gig with his smoking hot jazz band, Close to the Bone. We had a superb response from those who came along, on the night and in letters, emails and conversations since. Kettering Arts Centre at St Andrew’s Church was buzzing! Thanks to all the volunteers who made the event happen: selling tickets, setting up, sound engineering, stewarding, running the bar. Loads of work went into a very successful night. The acoustic of the building really lent itself to the quality of the playing, and as the night grew dark the atmosphere intensified. A huge thank you to Dave and the band for a great evening-they’ll be back!

More about Close to the Bone

Dave’s six piece band, Close To The Bone, draws on myriad influences ranging from Duke Ellington and Charles Mingus to soul, funk and hip-hop, and is a vehicle for compositions by Dave and co-writer Chris Lamptey. Dave’s composition “Demonology” co-written with South African producer and guitarist James Ribbans, has recently been selected for a forthcoming film on British sculptor and pop art giant, Sir Eduardo Paolozzi.

Kettering will not see or hear better musicians this year!

We have applied for a bar license, to complete the evening!

Tickets cost £8 (£7 concessions) and were available from Waterstone’s, High Street, Kettering, from Kettering Tourist Information Centre, after services at St Andrew’s Church, and online at We Got Tickets (click button)

Band Bios:
Dave Keech
Dave was born and bred in Kettering started playing the trombone at the age of 11 after being inspired by his grandfather’s brass band-fuelled passion for the instrument. He began playing in the school band whilst a pupil at Kettering Boys School and was taught by Maxwell Thornton, former trombonist in the GUS band.
He was exposed to serious jazz at the age of 13 as a member of Bob Hunt’s Blue Rhythm Band (another KBS pupil and now MD for Chris Barber) and by 18 was playing professionally in pubs and clubs in various jazz groups. He was thus able to fund himself through art school, graduating with an MA from the Royal college of Art in 1989.
Dave spent several years as a mainstay of the Ray Gelato’s Giants, touring extensively throughout Europe from northern Finland to southern Italy, as well as appearances at Montreal Jazz Festival and Carnegie Hall, New York. He made numerous TV appearances and recordings with Ray including the highly acclaimed “The Full Flavour” on Linn Records, on which one of Dave’s own compositions “Since You Moved In With Me” features.
He then lived and worked in Japan, designing musical instruments for Yamaha by day and playing extensively and recording as lead trombonist with Japanese contemporary big band The Blue Notes Jazz Orchestra by night.
When not performing, Dave runs London-based design company Keechdesign (www.keechdesign.co.uk), is a visiting tutor at the Royal College of Art, and is a trustee of the London-based arts charity, Olympian Arts.

Paul Tucker was born in Essex in 1968 and started playing many instruments from a very young age before deciding on the trumpet in the late 70’s, eventually studying with the legendary Dickie Hawden at Leeds College of Music. He has been involved with many different styles of music, from brass bands to contemporary jazz orchestras, including spells working with pop/rock groups.

He has played with artists such as John Dankworth, Kenny Baker, Bob Wilber, Kenny Wheeler, Jools Holland, along with many other groups and has directed, composed and arranged for many bands, including the Don Ellis Connection Orchestra, which he co-directed for 2 years, Obispo, the Afro-Cuban Salsa Project, and En Fuego, which he still composes and arranges for as well as playing in the band.
2007 saw Paul’s involvement with recording for the soundtrack to the film ‘Rise of the Footsoldier’ which was released at cinemas in July 2007, the track ‘Heaven Knows’, which features him on trumpet, is now available for download.

Drummer Nic France has been at the top of his game since arriving in London In 1980 when he began working as a session
musician. Within the first three years he played with a “Who’s Who” of British contemporary jazz and several international artists
including: Ian Carr’s Nucleus, Allan Holdsworth, Jim Mullen, Martin Taylor, Ronnie Scott, Kenny Wheeler, Hank Crawford, David
‘Fathead’ Newman, John Taylor, Gordon Beck, Loose Tubes, L. Shankar and Mose Allison. He also appeared on a TV drum
clinic with Billy Cobham.

His impeccable sense of groove and dynamics quickly made him a sought-after sessionist in the Rock and Pop music world as
well, with such artists as: Bill Withers [2 tours in UK. & Europe], Tanita Tikaram [3 World tours and 3 albums] and Working Week
[3 European tours, 1 in Japan and 3 albums]. He recorded with Pete Townsend, Thomas Dolby and played with Annie Lennox
and Nigel Kennedy.

He has played at many major venues worldwide including The Royal Albert Hall and Montreux, Nice, Detroit, Singapore and
Bombay Jazz Festivals, plus Glastonbury and Knebworth Rock Festivals. He appeared with guitarist Antonio Forcione at the Bath
Guitar Festival 2001 and again in January 2002 at Ronnie Scott’s Club. He has also played with leading British Jazz vocalists, Ian
Shaw and Barb Jungr at Ronnie Scott’s Club in London.

He has played on various Film and T.V. soundtracks including Absolute Beginners and several comic strip films.

One of his current projects is with South African Township band Mbawula with whom he performed at the Nelson Mandela South
African Freedom Day at Trafalgar Square in April 2006.

He has also been working with David Gilmour (Pink Floyd) in his most recent project and is featured on the DVD ‘David Gilmour
Live’.

He is also part of the regular ensembles of artists such as Andy Sheppard (Quartet), Julian Lloyd Webber (Bossa Nova Band),
Terry Callier (including a trip to Japan and the summer European Jazz festivals). He played at the Umea Jazz Festival in Sweden
in October 2005 with Anders Jormin, Andy Sheppard and Rita Marcotulli.

Tickets cost £8 (£7 concessions) and are available from Waterstone’s, High Street, Kettering, from Kettering Tourist Information Centre, after services at St Andrew’s Church, and online at We Got Tickets (click button)