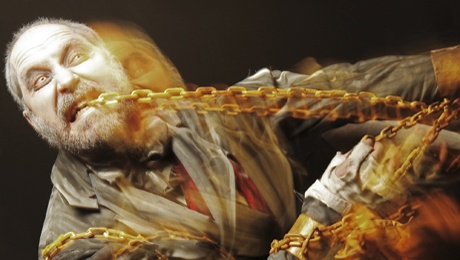 In celebration of the 175th anniversary of Charles Dickens’ ‘A Christmas Carol’, join us in Kettering Arts Centre this festive season for a special performance of James Hyland’s award-winning stage adaptation.

Show starts at 6pm and follows with a Q&A
Suitable for all the family but parental discretion advised for children under seven.

Told from the perspective of Scrooge’s deceased business partner, this ground-breaking theatrical event has been hailed as the “definitive telling of A Christmas Carol” (Redditch Standard), and rated as one of “the top Christmas shows in London, Edinburgh and around the UK” (High 50 Culture). Recognised by The Queen for its part in Dickensian Scholarship, this “forcefully compelling masterpiece” (Manx Independent) delivers thrills, chills and excitement aplenty for all ages.

Jacob Marley is dead and condemned to an eternity of carrying a heavy chain, forged in life; a life to which he can no longer return except to recount the tale of his miserly business partner, Ebenezer Scrooge, and the path that lead to his redemption. Through Marley’s words, we learn how three magical spirits opened Scrooge’s eyes and made him realise the true value of love and forgiveness.

Praise for ‘A Christmas Carol – As told by Jacob Marley (deceased)’:

“a tremendous achievement… a wonder to watch” ★★★★★ (Plays To See)
“storytelling at its best… a memorable and astonishing production.” (London Theatre 1)
“heart in the mouth theatre in its finest form” (Sheerness Times Guardian)
“a forcefully compelling masterpiece… outstanding” (Manx Independent)
“as Charles Dickens intended it… Imaginative and captivating” (High 50 Culture)
“an incredible one man performance… a master class in acting” (Lanelli Star)
“riveting acting… stunning voice work… unforgettable” (The Stage)
“thrilling… Hyland’s versatility and physicality are astounding” (UK Theatre Network)
“masterful storytelling… a production which enthrals at every point” (A Younger Theatre)
“a work of art, and one that must be seen… thoroughly recommended” (The Dr Bird)
“Wonderful storytelling… clever, funny and powerful” (Remotegoat)
“astonishingly powerful… extraordinary acting” (The Public Reviews)
“astonishing acting… a vibrant re-imagination of the classic” (Extra! Extra!)
“chilling, humorous, surprising… Powerful theatre indeed” (The York Press)
“Hyland is an immensely powerful actor… the kids were riveted” (The Independent)
“as Dickens intended… powerful, thought-provoking… definitive” (Redditch Standard)