An exclusive interview with – Vicki SWAN and Jonny DYER 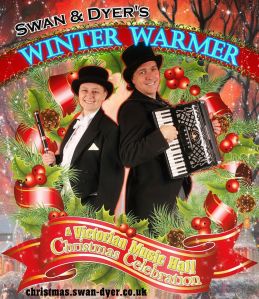 Vicki Swan and Jonny Dyer have been creating music together since their late teens after meeting at the local youth orchestra. They first formed a three-piece band in 1999 but five years later concentrated their efforts playing as a duo, though each has their own individual musical projects.

What makes these two musicians somewhat different from other duos is the choice of musical instruments to accompany their songs, a mix of traditional folk songs and self-penned works. They are currently working on a new album before taking to the road with their Christmas flavoured show, which in its full glory is aptly entitled Swan and Dyer’s Winter Warmer – A Victorian Music Hall Christmas Celebration.

Designed to appeal to all ages it is this show that is coming to Kettering Arts Centre on the afternoon of Sunday, 13th December. 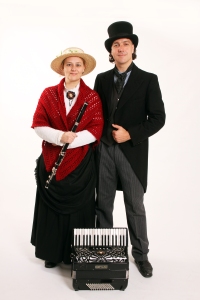 When I spoke with Jonny and Vicki they were ‘recuperating’ after spending a week in the recording studio and they told me a little more about the show, the instruments and their musical backgrounds.

“The Christmas show is quite different from our folk- based songs.” said Vicki. “What we have done is combined some of the favourite traditional music hall songs from the Victorian era that have plenty of sing-a-long choruses with the jaunty Christmas carols.”

Jonny added: “We looked around to find the music we like and tempered it to what we think the audience would like to hear and join in with. It is a happy celebratory show and some of the instruments we use are modern versions of some of those that would have been used at the time, along with some others.

“We use a lot of different instruments in the studio but have to be selective as to what we take on tour as everything has to fit in the car. For this show Vicki is bringing a nyckelharpa a flute and a Swanee whistle and I will be playing mostly on accordions. Oh, and although we only use it for one song, because it does pack down easily, we will have the harmonium with us as well.” 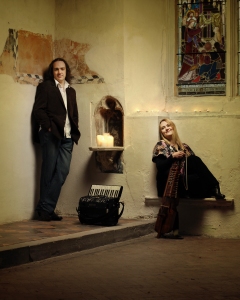 The nyckelharpa that Vicki plays originates in Sweden and is a 16 string keyed instrument played with a bow, though with 12 resonating strings and only three ‘played’ strings (the fourth is not keyed) and although she said it looks more complex to play than it is I am not quite so sure. Vicki came to ‘get to know’ this instrument courtesy of her Swedish mother and with her father being a Scottish piper, it is easy to establish from where her musical interests were garnered. She also plays the double bass, which she studied at the Royal College of Music and went on to win the solo double bass competition and, unsurprisingly, the bagpipes.

Jonny said: “The nyckelharpa is an amazing instrument, it fulfils a lot of roles at once, being either used as a solo instrument or for backing. It also means Vicki can sing while playing it which she can’t do with the pipes. 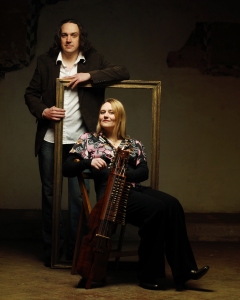 our music. When we write or find a new song we are always looking to create a new sound and breathe new life into it. You want to ask it questions, experiment with it, even play the wrong instrument just to see what it sounds like but without losing respect for the original. You have to find your own way to connect to a song and make it yours, it has to have emotion in it or all you will hear are just words and a tune.”

In their spare time both musicians enjoy listening to classical baroque music and folk songs from which they can take inspiration for new material.

“I particularly like listening to the Swedish group Väsen or folk singers like James Fagan and Nancy Kerr,” said Vicki, “but if I just want to relax after a busy day I will just as happily sit down and catch up on the episodes of The Archers or Home Front that I have missed.”

Jonny is drawn to the many different genres from early romantic classical music to jazz.

He said: “I love the rhythms created by James Taylor’s band, that funky, be-bop jazz sound. I like to re-create that sound in some of our tunes.”

For Swan and Dyer’s Winter Warmer the duo will be recreating the feel of the music hall tradition, complete with period costume. It promises to be a foot-tapping, hearty singing and jovial Christmas celebration event for all the family to enjoy. Samples of their Christmas songs can be found on their website here, for the real deal why not come along and see them at Kettering Arts Centre. Please click here for further information and booking.

Tickets for this event are available from Waterstones, High Street, Kettering, by post from Becky at St Andrew’s Church (cheques made payable to “PCC of St Andrew’s Kettering”) to St Andrew’s Vicarage, Lindsay Street, Kettering NN16 8RG. You may also buy or reserve tickets from Jaime Ferreira by email at office@ketteringartscentre.com or online at We Got Tickets (subject to a booking fee).