An Exclusive Interview With – ROBERT HABERMANN

Pete Austin has had the pleasure to interview Robert Habermann anticipating our second event in 2016 “I Got Gershwin” who never in the proverbial million years did  believe he would be living the world as penned by a Russian lyricist 1946.

Growing up in London during the 50’s Irving Berlin’s words ‘There’s No Business like Show Business’ were far removed from his everyday life. For him the business orientated family background offered little encouragement for the young lad who enjoyed singing in the school choir. At the age of nine he remembers having to stand up in front of the headmaster and sing (a situation I also experienced so know how nerve-racking that can be), but at that time thoughts of making a career in show business were nowhere on the agenda. (Actually I was picked out by the headmaster from my school choir as the only boy that looked as though he enjoyed singing. I was consequently given free singing lessons by a Miss Kane, who sang with The Bach Choir and who also worked with the composer John Taverner)

Today, Robert Habermann’s  shows, including ‘I Got Gershwin – S’Wonderful!’ which he is bringing to Kettering Arts Centre on January 23,  which has attracted  hundreds of people who, by the end of the evening, leave with much more than many of them expected.  These are unique musical shows, telling the life story chronologically whether it be – Sinatra, Gershwin, Berlin etc., filled full with great songs and stories to heighten the show’s drama.

Robert said: “The thing about my shows is that they are ‘storybook’ shows.  I do not try to emulate the people, but tell their whole story. It is something that is very popular in America, but more unusual to be found in England.

“You will not only learn about the life of the person, but also hear their wonderful songs. My musical director is Bunny Thompson has worked alongside the greats including Bing Crosby and Sammy Davis Jr. and Shirley MacLaine.

“The show is a ‘complete two act’ show  about the brilliant American composer George Gershwin,  where  the audience will not only hear all his popular songs that they know and love but  also about  his amazing life story, of  how Gershwin developed musically over the years from young  song plugger, his first mega hit “Swanee”,  his masterpiece ‘Rhapsody In Blue’ ,  onto his  great  opera ‘Porgy and Bess’. Then his tragic death at the age of 38.”

I caught up with Robert before he started his Christmas tour and whilst there is no audio in the following interview what follows is a brief insight into Robert’s own unexpected journey into the glittering world of showbiz.

“I was not a popular boy at school’” said Robert, “so when it was realised I had potential as a singer and offered free tuition as a soloist I could not believe it. I went on to win some cups and medals in various singing competitions.”

On leaving school ‘real life’ was first  working in the film industry as a ‘grader’ then building a successful  cake company from scratch,  but all the while Robert  continued  his singing alongside a piano accompaniment on a part-time basis.

Jump forward to 1993 and life was suddenly to take a dramatic turn which, as so often has happened in the past to other people, came about by chance.

In what Robert describes ‘a weird situation’. He said: “American jazz singer Mark Murphy invited me to join him at London’s celebrated music venue ‘Pizza On The Park, where I was introduced to one of the leading recording artists from the ‘40s to the 70’s – singer Margaret Whiting who, in addition to amassing a dozen gold records of her recordings, was also a star of radio, stage, TV and film. What transpired from that meeting will never be forgotten.  My life would never be the same again.

“The conversation first  comprised of  Margaret dropping names like  Frank (Sinatra) Sammy ( Davis Jnr) Steve Lawrence and Edie  (Gorme) like confetti who she knew; and I  sat there gobsmacked.

“When I happen to mention that I was a singer, I was asked to bring in a cassette of my work for her to listen to – it was back in the days when everything was recorded on cassettes – for she loved helping singers who she considered had potential. Ironically the first track of my cassette was the song: “Too Marvellous for Words” written by her father Richard Whiting. Now that ‘was’ a coincidence so much so that I remember the day, it was a Wednesday.”

It may just be me but something about what Robert told me next reminded me of the line from the Jimmy Webb song McArthur Park which was first recorded by Richard Harris, and contains the line – ‘someone left a cake out in the rain, I don’t think that I can take it’.

“It was almost down to a slice of cake that she invited me to go to New York to study. I couldn’t believe it,” Robert continued. “Somehow the conversation then turned to baking telling her of the cake company that I had built from scratch.  Margaret asked if she could try a piece.  I happened to have a cake in the car.

“Later, because it was raining, I offered her a lift home. After listening to my tape and liking what she heard she invited me to go to America to study with her. I told her that I could not afford to go and was amazed when she said it was all free of charge!!!  So I soon found myself living in New York.

“One of the first things we did was sit in at an audition where performers who had appeared on Broadway were applying to attend a Cabaret Symposium where they would learn how to put a solo act together to tour around The States – great solo singers in America in the past had all gone on this course and it was very hard to get into.

“During the auditions, the applicants would be halfway through a song, when they would be stopped and unceremoniously thrown out. It was really cruel but that was the way the system worked.”

When Margaret suggested that Robert should apply to go on this course he was petrified.

He said: “I managed to sing my song right to the very end without interruption.  At the end, there was an ominous silence. After what seemed like an eternity, the judges said they had never heard anything like it and loved what they had had heard. This led to me gaining a scholarship to study at The Symposium in Connecticut.

“The people I was up against were all seasoned Broadway performers. I was just a middle-class kid from London. It was the start of the most amazing year of my life.

“It was like falling into a pot of jam. After completing the course, they wrote a cabaret show for me in New York where I won the Best International Performer in 1994, which were like the Oscars presented by the Manhattan Association of Cabarets of New York.”

After the success of this show, Miss Whiting suggested Robert return to the UK and present what he had learned in New York to a British audience. 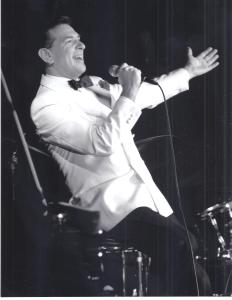 The show, ‘His Way’ was a show celebrating Frank Sinatra’s 80th birthday. The fact that Frank was still alive at the time made Robert unsure if this would work but when assured the legendary singer had given his blessing to the project, it went ahead where it was performed at London’s Queen Elizabeth Hall in 1995 to critical acclaim and has since been updated to mark Sinatra’s Centenary and is still one of Robert’s regularly performed shows.

Since then Robert has created many different shows which have toured not only the UK but around the globe. He loves singing Gershwin’s songs and his reason for doing so is down to the huge range of styles and great tunes available to choose from.

Although a solo performer, I asked him if he could chose anyone to join him on stage to perform a duet he had no hesitation in saying Doris Day.

“I would recommend everyone to listen to her singing, she is perfection.” he said. “Given the chance I would like to duet with Bette Midler, she’s fabulous and perhaps Michael Buble. And with technology as it is now, and if it could be arranged, Doris Day would be my first choice.”

He may not have any singing partners when he comes to Kettering but do not fear. Robert does not need one. His storybook show ‘S’Wonderful’ about the life and songs of George Gershwin is as a complete a show as you will ever need to see.

For information about the latest show with Robert Habermann at the Kettering Arts Centre and full booking details please click here.

Tickets for this event are available from Waterstones, High Street, Kettering, by post from Becky at St Andrew’s Church (cheques made payable to “PCC of St Andrew’s Kettering”) to St Andrew’s Vicarage, Lindsay Street, Kettering NN16 8RG. You may also buy or reserve tickets from Jaime Ferreira by email at office@ketteringartscentre.com or online at We Got Tickets (subject to a booking fee).