An exclusive interview with – Jim Tavaré by Pete Austin 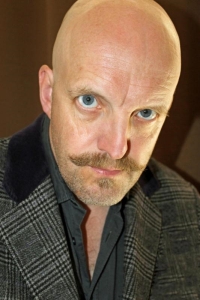 Time differences and pressures of work made it difficult to arrange a time to speak directly with Jim Tavaré.

When I sent the L.A.-based double-bass playing comedian a request for an interview (email is quicker than letter writing when the servers are up and running) he replied that due to filming commitments he was unable to arrange a day/time to speak with him.  However, if I could send him a set of questions he said he would do his best to answer them.

The headline act for our November Rolling in the Aisles (RitA) Comedy Club night did not disappoint. For more about the man who has worked alongside Andy Serkis, gave Ricky Gervais his first TV spot and who can count Prince Charles as a person friend.

Pete Austin: Where / when did your road to comedy start?

Jim Tavaré: I got bullied a fair bit when I was at school in Poynton, (Cheshire). I had moved from Essex and other kids didn’t like my southern accent. Making people laugh was a kind of survival mechanism that got me through.  From about the age of 12 I watched Tommy Cooper, Laurel and Hardy, Mike Yarwood and Morecombe and Wise on TV with my Dad, and we howled. I also loved sitcoms like Fawlty Towers and Rising Damp. I would have loved to be an actor but I couldn’t even get picked for the school play. Eventually I went to art college to study graphic design and the best part for me was multi media studies where we would film sketches and mock news items. I was totally hooked.  After just one term of art college I moved to a squat in Brixton, London  and immediately got involved in drama classes, sketch groups and youth theatre. It was then I met Corin Redgrave who coached me and helped me win a place at RADA.

My first job after leaving drama school was in a Pantomime: Little red Riding Hood at The Dukes Playhouse, Lancaster. Andy Serkis was the lead and I played a multitude of minor roles and played my bass in the orchestra pit. It was a painful experience and I couldn’t wait to leave.   It was then I decided to pursue the art of stand up comedy…

PA: Who was your inspiration to take up the bass – when did you realise you wanted to play a double bass – not probably the 1st instrument of choice for many people

JT: I took up the double bass at school because it was the only instrument left in the school music cupboard and nobody else wanted to carry it home.  It also meant my mum would have to meet me from school and I wouldn’t have to ride the bus, which I hated.

It was around this time I formed a rockabilly band called Riga-Mortis and I learnt to play bass to a sufficient standard. 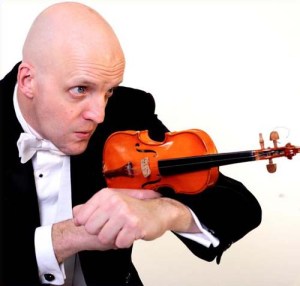 Years later, when I was failing miserably as a stand-up comic I hit on the idea of going on stage with my bass. It had the extraordinary effect of closing down hecklers and somehow getting the audience’s attention. Suddenly all my old material started working. I think they thought I would play a gavotte at any moment but I never did. Then right at the end I bowed one note on the strings and said ‘Good night’.

The next week I decided to add the tuxedo and create a kind of reject from the Philharmonic sort of character. This raised expectations even more. Still I didn’t play.  Finally, at the Edinburgh festival in the early nineties I began experimenting with the bow to create sound effects and punctuating my stand up with the odd bit of pizzicato.  These days I’ve probably broken the unofficial record for most bass jokes performed in under an hour.

PA: Does it have a ‘pet’ name and does it always travel 1st class?

JT: It was always Bassie. Then she broke in half and now I’m working with a ‘Susan’.  Travel with my bass has always been a nightmare. These days there are restrictions on the size of baggage allowed on planes, but I found a guy in Nashville who constructed me a bass that folds in half and fits into a small case. Now I no longer get over charged and brow beaten at check-ins.

There are many comedy clubs/stand-up comedians on the circuit – do you consider them friends or fierce rivals?

Certainly not rivals. I never got into this as a competition or a race. I got involved because I couldn’t do anything else and at the time the circuit attracted eccentric performers who all had something different to say. Many of the circuit performers are my dearest friends and we try and help one another out.

PA: What was Ricky Gervais like to work with when you were co-writing The Jim Tavare Show?

JT: We were inviting writers to submit material for my TV show and one day a guy walks into our office with a pile of scripts and says “Are these any good?” It was Ricky Gervais. He had written so much stuff I couldn’t learn it all so we asked him to be in the show to do his own ‘bits’. That was his first TV spot and after that he got The Office.

PA: How do you rate being Prince Charles’ favourite comedian? 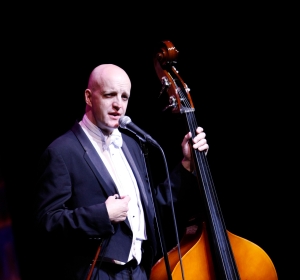 JT: I’ve performed five times for Prince Charles. It all came about from the Royal Variety show. Apparently he made a note of my name and asked to see more of me in the future. The first private show I performed was at The Ritz for his private staff. It was the first time he stepped out with Camilla and the place was so rammed with paparazzi I couldn’t get in the door.  My second private engagement was at Highgrove for the King Of Greece 60th birthday. I was told not to expect too much and that it would be a very relaxed affair but when I arrived the Queen was in attendance as well as 13 crowned heads of Europe and Charles’ two sons!  I was told the Queen wouldn’t laugh because she had seen every comic routine known to man but she was the first to give me a round of applause. After that the rest of the audience took their cue from her to laugh and applaud.

PA: You have been successful in the USA how much do you have to change your material for different countries in which you perform?

JT: I have a different ‘schtick’ when I’m working Stateside. I use more energy and sell my stuff with greater emotion. UK audiences prefer a dry delivery.

PA: Where to next in terms of your professional career – as a man of many talents, if you had to choose, following your appearances in several films since your debut playing Tom the Innkeeper in Harry Potter and the Prisoner of Azkaban – would you consider forsaking the comedy circuit to become an actor, or full time musician?

JT: I love performing my comedy act but as time goes on I don’t like all the travel. Comedy can also be a little lonely so I like getting booked for film parts because you become a team player and together you work at creating something special. With comedy you only have yourself to blame.  As for music, I consider myself an amateur and do it purely for enjoyment and to relax.

PA: Where has been the most unusual venue in which you have played and what is your best ‘live’ experience?

JT: I once performed in Belize for the British army in front of a platoon of Ghurkas. They spoke no English whatsoever but when their commanding office laughed the Ghurkas laughed. The biggest reaction I ever had was at The Just For Laughs Festival in Montreal.  I was lucky because one of the producers from the sit-com ‘Wings’ was in the audience and they wrote episode based around my act.

PA: What do you do to unwind – your favourite form of relaxation (reading/music etc)?

JT: Recently my wife and I acquired an allotment where we live in Los Angeles. The weather is perfect for growing here. You can have tomatoes all year round and    we have even grown watermelons. I like the idea of growing my own food so much we just bought a house on quarter of an acre.

PA: If you had to make a quick choice to save one personal item from your home what would it be?

JT: I guess it would have to be my trusted double bass. If it all went wrong I’d still be left with the big tool of my trade.

There you have it, I hope that has whetted your appetite to come along to RITA on November 28 to see Jim in action. Please return to our events page here to see more about the other acts on this bill and for full booking details.

Tickets for this event are available from Waterstones, High Street, Kettering, by post from Becky at St Andrew’s Church (cheques made payable to “PCC of St Andrew’s Kettering”) to St Andrew’s Vicarage, Lindsay Street, Kettering NN16 8RG. You may also buy or reserve tickets from Jaime Ferreira by email at office@ketteringartscentre.com or online at We Got Tickets ( subject to a booking fee).