An exclusive interview with Chris Conway of GOVANNEN

Amorphous in number but certainly not in content Govannen constantly delights audiences with an eclectic mix of songs and tunes. Originally a trio, the group is now a regular four-piece band but has the benefit of another member to call upon when a fuller sound is required – as the new album, The Endless Road, testifies.

Although several members had known each other for more than 20 years and, on occasion have played within the same group, Govannen as an entity, only came about in name around ten years ago.

At the core of this Leicestershire-based group are Chris Conway and Dan Britton, who around 22 years ago were part of Storm Thieves, a Crosby, Stills and Nash style harmony group. However, by the end of the 80’s and early 90’s there was a burgeoning Irish music scene in the county’s pubs and clubs.  Realising there was a huge demand for this style of music the two young men decided to change their own musical direction and quickly set about establishing themselves as a fun-loving, Irish music playing outfit.

Chris picked up the story and said: “Dan and I teamed up with the sisters Adele and 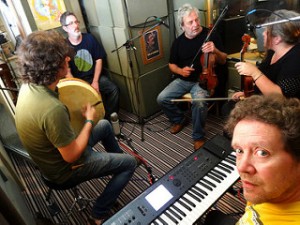 Bridget McMahon who had been singing Irish songs for some time in the area and although Bridget immigrated to Ireland, Adele stayed and we played as a trio, but didn’t have a group name. Neil, who Dan had known from even further back in time, then joined us on cajon and percussion to fill out our sound. Our newest member, Roger, gives us a more flexible line-up as he either plays alongside Adele on violin or if she cannot make a gig, he stands in for her – Govannen is now a floating four or five-piece band. We all have different roles to play and a wealth of material to draw upon.”

That material, like the band, is in a constant state of flux to the extent that, in some ways, it could be said that Govannen is not one but three groups. As Chris told me: “It can come as a bit of a surprise when people turn up to one of our concerts, as depending on which albums they have heard, we could be playing something completely different to what they expect.”

To expand on this Govannen is a/ the perfect choice for ceilidhs and barn dances b/ one of the best Celtic music bands in the UK which perform traditional and contemporary Irish songs including songs written by various band members  c/ a new age  instrumental group with a beat. It has resulted in worldwide album sales of 10,000 and two awards in the USA.

Chris said: “We were approached by a new age record company who wanted a Celtic album and we wrote the Healing Waters album for them but at that time we had no band name. We started looking for some suitable names and found Govannen, the name of Celtic God who was a blacksmith who made impregnable armour and anyone who drank from his sacred cup would no longer fear age and infirmity. It sounded like a good name for the band and ten years ago, that is who we became. We have made several albums in this genre and our next, Celtic Air, will be complete our series of the four elements, earth, water, fire and air.

Having known each other for so long, although many still follow individual careers and are members of other groups Govannen is a close-knit unit. It places the emphasis on fun by playing good-time music to entertain the audience at every concert or event – some 60 to 70 a year. I asked Chris what sort of venue he enjoys playing most of all.

He answered: “I enjoy every type because it is the variety of what we do keeps everything

fresh. We do a lot of summer Ceilidhs, which are fun and then it’s nice to do a listening concert. On the other hand we can then do a pub gig which is like a shot in the arm. Do too many of any one sort in a row and it’s a bit like ‘Here we are again…” by doing different events prevents us getting stale. Sometimes during a concert one of us will say ‘let’s do so and so’ and it may be a song or tune we haven’t played for a while or one that only half of the group know but we go with it, it keeps us on our toes. There are no egos in this band, we are so relaxed with each other we just have fun playing and want others to have just as much fun listening to us.”

My next question to Chris was to delve into what generates this feel-good factor within the group. After due consideration about what libel cases he might generate, he agreed to describe the members of Govannen and started with his long-time duo partner Dan.

He said: “Dan is like the engine of the band. He sings the Irish songs and plays guitar and bodhran. He is an accomplished singer songwriter in his own right and is our main singer. Neil is a great communicator and is our caller at ceilidhs. He will always get the people up dancing, he’s a natural and when he plays percussion it can sound like a full drum kit. Adele is very shy and will hardly say a word during a concert but she is a great violin player and our walking encyclopaedia. She has a wealth of tunes in her head, many of which she learned from her father. Roger is an extra fiddle player who has played with all the greats in the folk world such as Martin Carthy and has appeared on the London stage, including Warhorse. His is a different style to Adele’s playing, he is especially good at American hoedowns which all gives Govannen a vast repertoire of songs and tunes to perform.”

For the sake of fairness Chris then turned the spotlight on himself and said: “I play the piano. I come from a jazz and world music background and would describe myself as being the nerd of the group, the one who sprinkles fairy dust on top of what we do by adding jazz chords to tunes and providing vocal harmonies. Although I do sing some songs my voice is different to Dan’s – his is more suited to the upbeat traditional songs, mine is better suited to the ballads we perform. I just try to make us sound different from other bands playing Irish music.”

what he describes as a ‘keyboard in a box’ – he is a multi-instrumentalist. Among the many other instruments he can play are 9-string acoustic & electric guitars, low, tin & twin whistles, kalimba, theremin and zither.

“The piano is my first instrument,” he said: “but there are not many cool examples of piano playing singer songwriters apart from Randy Newman and Gilbert O’ Sullivan and maybe a couple more. I am not very proficient on the other instruments I play but I get by.”

This ‘getting by’ has resulted in Chris writing, recording and producing solo albums in genres ranging from his singer-songwriter material and jazz to electronic and Filk – science-fiction folk music.

Truly a man of many talents which, when combined with the differing musical backgrounds of the band members result in the excellent sounds which resonate from the stage at any Govannen concert. Audiences can still be surprised and amazed as these talented musicians switch seamlessly in the twitch of an ear (a more appropriate phase when discussing music than the oft used blink of an eye) from one style of music to another.

Chris promises the Govannen concert at Kettering Arts Centre will be a fun and entertaining evening with a lot of singing (join in with Whiskey in the Jar if you will), and a lot of Celtic dance music. He said: “We will be bringing a lot of different things to the table, come and join us.

I am sure that after listening to this infectious music anyone who has not already done so will want to book tickets for the concert on Saturday, March 5th – for further details and booking information please click on our event page here.

You may also buy tickets by emailing office@ketteringartscentre.com or online at We Got Tickets (subject to a booking fee).