An Exclusive Interview with A PANTALOON – Chris Smart by Pete Austin!

Rarely do I get the opportunity to speak with my ‘victims’ with a face to face interview but there are, happily, exceptions to the norm. When the Pantaloons visited Kettering Arts Centre in May with their take on Oscar Wilde’s, The Importance of being E(a)rnest, fortuitously for me, if not the actor, Chris(topher) Smart was with the touring theatre company but not actually taking part in this production.

Chris, or Gulliver as he will be in June when the company returns with Gulliver’s Travels, snuck away from the cast members before the show began (in E[a]rnest) to tell me a little about being – A Pantaloon. 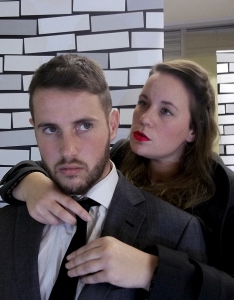 be my eighth production.” he said. “I had to audition to join The Pantaloons, like everyone has to, and like most of the company, we are known as associate artists. I was fortunate to be taken on after my audition and luckily for me they keep asking me back. We are all professionals and keeping busy has meant that I have not had to look for other work.”

Life for a Pantaloon is one of constant change and almost exemplifies the story that was about to be told on Kettering Art Centre’s stage that night – not only who is Ernest but trying to reveal the real identity of a Pantaloon. In any one production the cast is likely to take on a number of roles and in a year, after appearing in several productions, any member of the team could be forgiven for not knowing who they really are.

“Typically there are four, sometime five people in each production,” said Chris. “Generally we have around 11 days to rehearse a show before taking it on tour, then we have a rest for eight or nine days before we start rehearsing the next production. In the meantime, other members of the company are rehearsing a different production and take that on the road as soon as the other ends. Very rarely is there a crossover where we would have to be learning new lines whilst we are on tour.”

Anyone who is familiar with The Pantaloons will know that the source of their productions range from the classics like Austen and Shakespeare to a take on The History of Britain or the works of Jonathan Swift. Any production is generally regaled with musical content, game shows, slapstick and audience participation. To an outsider it may seem somewhat chaotic at times but please take note, the majority has all been painstakingly created.

As Chris was quick to point out. “The script is scripted. Yes there are the ad-libs and

improvisation to involve the audience but that is what the cast enjoy about the productions. We do like trying to make each other laugh but that is because we all enjoy what we do and while some of our style can confuse people it’s what makes The Pantaloons production what they are, entertaining for everyone.

“We are like a family and there is a great rapport and camaraderie between us. When on the road, we turn up in our van, set up the scenery, put on the show, then pack everything away and head off to the hotel before moving on to the next venue. That can be anything from playing at The Royal Theatre in Bury St Edmunds one night to a village hall the next and even a church like this (St Andrews, Kettering). We are a professional company bringing theatre to the people and making it accessible to all. Our aim is to get people in to see a play who would possibly not go to a West End show thinking it is not for them, we are trying to take out the stuffed shirt syndrome some people have about the theatre.

“The stories we tell are genuinely true to the original as written but we just add that little extra to it and spread our wings a little. My favourite productions so far have been taking part in our productions of Pride and Prejudice as well as Bleak House which allowed us to explore both high drama and high comedy at the same time.”

The Pantaloons Theatre Company has now been entertaining audiences for 12 years. There are three core members behind the scenes responsible for writing and producing the shows that eventually end up being taken around the country. Chris is thankful that he is part of this company.

path in the acting fraternity. By his own admission he is a ‘very vain’ person and enjoys the adulation of the audience at the end of a night’s performance.

Tickets for this and other events are available from Waterstones, High Street, Kettering.

You may also buy tickets online at We Got Tickets (subject to a booking fee).