Tickets available on the door for tonight’s Rolling in the Aisles with Martin Mor! Doors open 7:30pm – 8pm Start

Martin comes from Northern Ireland, and after a successful career as a circus performer, he turned his attention on the unsuspecting comedy circuit.

With almost 30 years experience as a professional performer, Martin has established himself as one of the UK’s most popular and in-demand comedians.

Martin has performed successfully at events of all description; from the Hammersmith Apollo to a show for the inmates of an Italian prison, from comedy clubs to performing before members of the British Royal Family.

Martin has numerous appearances on radio and television.

As well as devising and performing his own BBC television show, he has written jokes for some of the biggest names in British comedy.

Martin is a specialist MC, a regular headline act at most of the UK’s major comedy clubs, and also performs at comedy and arts festivals.

Martin’s photograph is featured on the popular board game Trivial Pursuits, (The Genus Edition). On an arts entertainments square, he is seen wearing a
leotard.

“A comedy institution” The Guardian

“Martin is the act that has influenced me the most, the UK comedy circuit would not be the same without him.”

“A very funny lad, with the best beard in the business.”

Sarah Callaghan is an award-winning comedian and writer.

In 2014 she was named as ‘One To Watch’ by Time Out Magazine and in 2015 she took her critically-acclaimed debut hour show Elephant to the Edinburgh Fringe. A confessional exploration of escape and ambition, Elephant received great reviews across the board and Sarah was widely heralded as an exciting new comedic voice, a status cemented by her Malcolm Hardee Award nomination for ‘Act Most Likely To Make A Million Quid’.

“The instant she steps on stage you know you’re in the presence of someone new and special” ★★★★★ The Mirror “A powerhouse. She’s an utter natural on stage” Chortle ****

“class comedy, reminiscent of a young Kathy Burke” The Herald **** 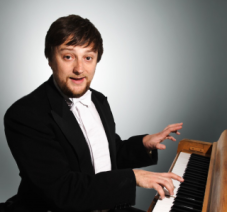 Like many an Essex boy before him, James Sherwood was raised in Oxford, Bristol, Essex, and London, went to Magdalen College, Oxford and sang in the choir. Early comedy success included being a semi-finalist in ITV’s stand-up talent show Take the Mike, being a runner-up in the BBC New Comedy Awards and the FHM Holsten Pils Comedy Final.

Having originally made a name for himself on the live circuit as a topical comic, in recent years James has incorporated a number of self-penned, original comic songs into his act. Although this involves lugging a keyboard around with him, it’s worth it – songs about grammatical inaccuracies and failed nightclub courtships have had audiences literally crying with laughter

James contributes the funnies to radio shows across the BBC, including The Now Show, The News Quiz and BBC7.

He regularly reviews the newspapers on Sky News, writes a regular blog on The Guardian website and spends most Sundays singing in a church choir, despite not actually being religious.

His debut Edinburgh show ‘I Know What You Did Last Sunday’, was a total sell-out and was followed in similar fashion with ‘James Sherwood’s Somewhat Premature Review Of 2007’.

“Worth the ticket price alone … clever, funny and will have fans singing along” Chortle

Tickets for this and other events are available from Waterstones, High Street, Kettering. By post including an SAE to Jaime Ferreira at Flat 1, 15 Havelock St, Kettering NN16 9PZ (cheques made payable to “PCC of St Andrew’s Kettering”).