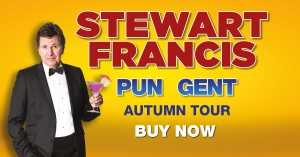 When it comes to putting a show such as Pun Gent together, packed as it is with killer gag after killer gag, there’s one faculty that Stewart Francis will be relying on more than any other. “Remembering them all and in the right order is the tricky part of my style of comedy,” he confesses. “I approach it the way I do a script, so there are chunks that lead on to other bits while one joke will tell me that I’m at the end of a certain chunk. It’s the only way I can do it. But the beauty of being a one-liner guy is that while there’s a flow, I could still pop a joke in from the middle of nowhere that I might have forgotten to do earlier and it won’t be distracting: it’s just another one-liner.”

With a series of sell-out tours under his belt (previously he’s been on the road with the likes of Tour De Francis and Outstanding In His Field), and with the experience of writing and performing jokes for a quarter of a century, one thing this UK-based Canadian knows is how to structure a live comedy show. “This one was good to go at the end of last year, but I used the time in between to see if I could come up with a new gag that could bump out one of the ones that might not be quite so strong. But it’s nice to have an arsenal of gags; it’s comforting to know when the show is more or less ready and that I’m closing in on the magical hour. I’ve got some technical things that I’ll be doing on this tour and that will take up some extra gorgeous moments.”

In this day and age when a comedian seems to be just one throwaway comment or well-constructed joke away from a tabloid storm, Stewart Francis might not be a comic you’d immediately associate with the ‘offensive’ branch of contemporary stand-up. But that doesn’t mean he’d reject performing a gag he’s come up with just because it might touch a raw nerve somewhere. “I just want the jokes to be funny and in terms of closer-to-the-bone ones, I wouldn’t run three of them in a row because then that would become a theme and I’m then a comedian I don’t want to be. For me, comedy works with the element of surprise, so I like doing a couple of kitten jokes and then something dark, as that catches people off-guard and is beneficial to the joke. But I don’t deliberately go looking for a dark joke, they come up as and when. You as an audience member don’t have an idea about my take on a particular subject matter; if you take a step back and look at the joke, you’ll see that it’s just wordplay.”

While there might always be some ambiguity in a critic or audience member’s mind over where a joke is coming from and who the intended target might be, there’s one thing that Francis is crystal clear about. “I’m living a charmed life. Coming over to the UK eight years ago was the real turning point professionally for me; I’d been coming over for years as a part-time player but being here permanently lifted me to the level that I always felt I was destined for. It wasn’t happening in Canada because there’s not really a star system there, so the talented people have to go further afield to ply their trade. But I haven’t plateaued yet, and hopefully I’ll be in control of that and decide when to head off into the sunset.”

When it comes to his stand-up career, Francis has spoken before of heading off into the sunset to pursue other creative avenues. “I’m always optimistic that my current tour is my last. But threesomes with shemales and coffee enemas don’t pay for themselves, so the reality of the situation is that I have to keep doing what I’m doing. I’m not being maudlin in saying it’ll be my last tour; I’m hopeful that a sitcom comes along and all my creative energy goes into that. I’m a one-trick pony in the sense that I like to focus on one thing at a time. And I’m an eternal optimist so if the sitcom does happen then in all likelihood this would be my last tour.”

This talk of a sitcom isn’t just wishful thinking though, as a half-hour script featuring the words ‘by Stewart Francis’ currently resides among the in-trays of people who could make that dream become small-screen reality. “The first episode is written and rewritten, it’s bullet-proof; it’s oot there as a Canadian would say. It’s just ready for someone to say ‘let’s get that piloted’, and then cue the BAFTAs. I loved writing it and it’s amazing how time flies; you start off with a blank screen and then start writing and suddenly it’s four hours later. The frustrating bit is the rewrites and taking bits out which you don’t want to lose.”

As with many of the most successful sitcoms of recent times (Larry David’s Curb Your Enthusiasm, Jason Cook’s Hebburn and Miranda Hart’s, um, Miranda for three) much of the material comes from the writer’s life experience, but with added-on extras which spin it into a crafted sitcom. “It’s an exaggerated version of my life. So, in the show, I’ve done everything I possibly can in Canada and I’ve come over here believing that there is some extended family I didn’t know about. And when I come over I get a huge surprise and then on comes the mayhem: it’s like a live version of Family Guy and very silly. If you’re a fan of my live work then this TV version will be the best thing I’ve ever done. I love the visual, I love television. I’m a cartoonist. I guess my one-liners are like little cartoons.”

As well as pursuing the sitcom dream, Francis will be taking his comedy to new heights in early October. Quite literally, when he takes part in Stand-Up On Everest, a Save The Children charity event also featuring fellow Canadians Glenn Wool and Craig Campbell, New Zealander Rhys Darby, and Irish wags Tommy Tiernan with a special guest TBC. Accompanied by around 50 comedy fans (and medics), they’ll take part in a nine-day trek to perform on a purpose-built stage at Base Camp. “I’ve altered a few dates on the tour to make sure I could participate in it as it’s really a once-in-a-lifetime sort-of experience. I’m in the gym pretty regular as it is, but closer to the date I’ll be taking stairs more, as ridiculous as that sounds. But I’m good to go, coach.” View our event page here…

Stand Up On Everest 2015 trek: http://www.standuponeverest.co.uk

You may also buy or reserve tickets from Jaime Ferreira by email at office@ketteringartscentre.com or online at We Got Tickets ( subject to a booking fee).

Kettering Arts Centre Administrator
View all posts by batnet →
This entry was posted in Uncategorized. Bookmark the permalink.